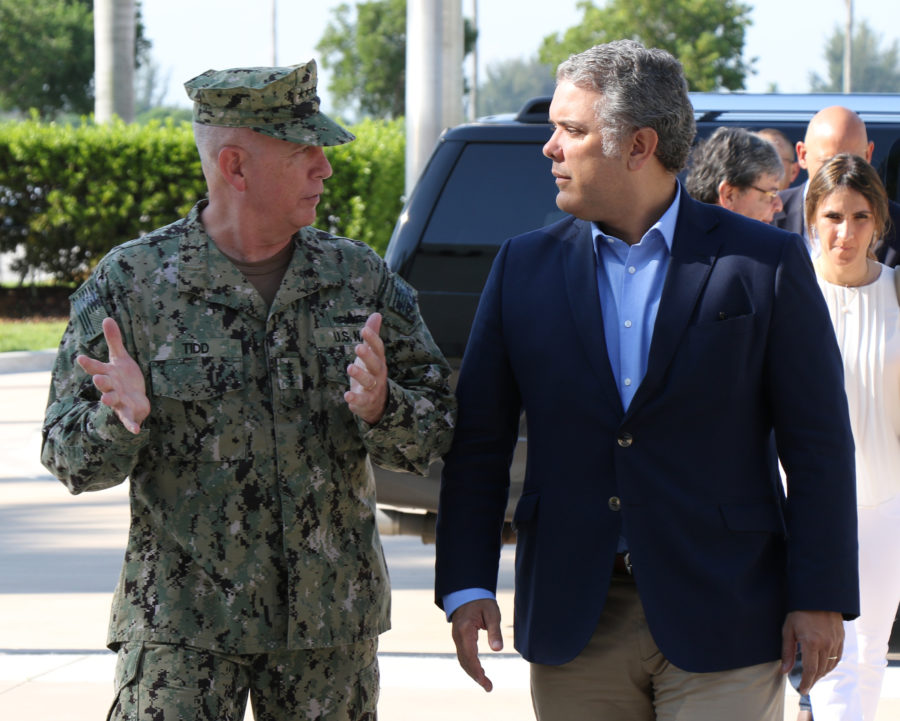 U.S. Navy Adm. Kurt Tidd, commander of U.S. Southern Command (SOUTHCOM), escorts Colombian President-elect Ivan Duque at the command’s headquarters in Doral, Fla., July 14. Duque met with the Admiral and other SOUTHCOM leaders to learn more about the U.S. military command and its defense partnership with Colombia, as he prepares to assume the presidency of his country Aug. 7. His visit reflects the longstanding cooperative ties between the United States and Colombia, and highlights the strong defense partnership between the two countries’ armed forces. SOUTHCOM expressed its desire to continue its successful partnership with the Colombian armed forces and collaboration towards increasing security and stability in the region.

Relations between Venezuela and Colombia have had good times, of harmony, friendship and good neighborliness, and hostile times, that are complicated and with backs turned to the 2,219 kilometers of problems we share.

In the 20th century, the best decade was that of the nineties, where through the mechanisms created by the San Pedro Alejandrino Act, the negotiating commissions and global framework, we built — as never before — a relationship that was stable and secure through commerce, communications, infrastructures, and we found the route to mutual trust in security and defense matters. We went from the verbal and physical confrontation of 1952 (Crisis of the Monks); 1971 (Crisis of Admiral Padilla); and 1987 (Crisis del Caldas) — about sovereignty in the Gulf of Venezuela — to cooperation, integration and understanding. With the Gulf removed from the talks, we moved forward.

The ascent of Hugo Chávez to the presidency in 1998, forever upset that framework of options and actions that had been agreed and legalized. The position of “neutrality” with regard to the FARC; the imposition of unilateral measures on multimodal transport, violating the integration agreements; the secret negotiation of a pre-agreement on delimitation behind the back of a part of the CONEG in 2007, discovered by the distinguished defender of the national cause Francisco Javier Nieves-Croes; the rupture of diplomatic relations in 2010 and, finally, the exit of Venezuela from the Andean Community in 2011 destroyed everything that had been built.

The arrival of Colombia Pres. Juan Manuel Santos in 2010 opened a new chapter in binational relations, where his personal interests were a good match for Chávez’s: Santos pursued a peace process with the FARC, where Venezuela became a logistics provider of the talks in Havana. The former’s pragmatism in pursuit of the Nobel Peace Prize, resulted in cheers for the latter as an ally of the FARC-EP. However, that very personal relationship between the two leaders did not translate into improvements in trade, neighborliness, and much less security and defense. The relationship went into a tailspin after Colombian Foreign Minister Holguin managed to collect the debt of Colombian exporters and they decided to bet on the Pacific Alliance as their primary market. And Santos, focused on peace at any cost, turned his head to avoid confronting Chávez.

The pact of Santa Marta – of which I wrote in 2010 – was working. But the death of Chávez in 2013 and the arrival of Maduro in no way altered Santos’ iron will: nothing could disturb the development of the peace process — not the 3,000 detainees, nor the 65 dead and nor the wounded of the protests of 2014, moved his position a whisker.

Only the closure of the border in August 2015 and the images of Colombians whose homes were destroyed by tractors and expelled crossing the river with their belongings on their backs held his pragmatism at bay long enough to complain to Maduro, not very hard, not very loudly, because Havana was more important. For 2017, with the serious violation of human rights in Venezuela, the Nobel Prize winner felt free to express himself and ordered the ambassador’s recall.

Gone are the relations of economic complementarity, the value chains of the factories on either side of the border between Táchira and Norte de Santander. Not a word about the COMBIFRON and much less about the CONEG, goodbye to the agreements, reduced tariffs, border mobility cards, dredging of the shared basins and combined operations to defend ourselves from the guerrillas, the paramilitaries, the ELN, and all the irregular groups. The border is legally “closed.” But being porous and extensive, it is a strainer where so many things pass through: gasoline, regulated basic foods, paper money, medicines, drugs and now, Venezuelan citizens fleeing on foot with two suitcases and a single purpose: to eat.

The arrival of Iván Duque Márquez to the presidency of Colombia forces us to reflect on the future of the binational relationship. His position has been fixed since the campaign, where he announced that once he was in office he would accompany the efforts of the OAS and the UN to begin the process before the International Criminal Court for crimes against humanity, likewise, that he would not appoint an ambassador in Venezuela because he does not recognize the regime emanated from the elections of May 20. In other words, he does not recognize Maduro.

In this context, it is logical to think that there are conflicting, bitter and hostile times ahead. The rupture of diplomatic relations weighs heavily in the air, as well as a new “closing” of the borders from Venezuela. If there is an incident with the security forces, in the absence of formal or ad hoc mechanisms of verification, this can become a trigger for other actions: mobilization of troops or skirmishes, which nobody wants and should be avoided at all costs.

Geography forces us to remain united, our bonds reinforced by the arrival of 1 million Venezuelans to Colombia; this all demands prudence, temperance and serenity. This divorce with children that is our binational relationship is undergoing one of its worst chapters. Perhaps in Nariño they will behave on the basis of these three premises, ignoring the war drums and ignoring the threats, but in Miraflores, we are not, if they even recognize them.

by Maria Teresa Belandria, Fulbright Scholar at the William J. Perry Center of the National Defense University in Washington, DC. Follow her on Twitter: @matebe (Read another article by @matebe here.)