Venezuela’s Fake Opposition: How the Regime Kidnapped the People 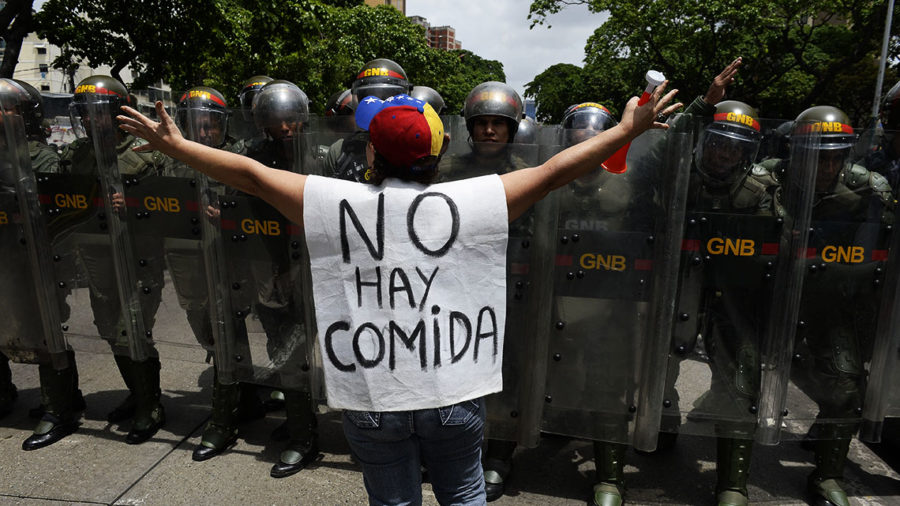 Venezuela’s Fake Opposition: How the Regime Kidnapped the People

The chatter in the world of Venezuela watchers this week was about Harvard professor Ricardo Hausmann’s proposal for a D-Day Venezuela: he argued the opposition-controlled National Assembly should use its power as the internationally-recognized legitimate government to depose Maduro and request an international military intervention to assist it in restoring democracy to Venezuela.

Americas Quarterly quickly published a shoddy riposte with poor analysis by two academics not known to the LatAm world. The apparent thrust of their argument centered on three points:

Nevertheless, Hausmann’s outrageous and unpalatable proposal got 89% approval in a Twitter poll by expat oil man Pedro Mario Burelli (well known to the LatAm community) with more than 34,000 people voting. 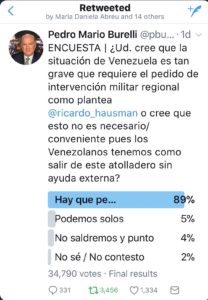 What do Venezuelans understand that most of the foreigners pushing for a negotiated exit for the Maduro regime do not? That there is no “exit strategy” for Chavismo, because the leaders of the opposition coalition MUD are bought and paid for by the regime’s dirty money, and so are the lobbyists engaging the White House with tales of a Maduro exit. They keep claiming Maduro might exit, were he given amnesty that would not tarnish his reputation and the regime got to keep its stolen money — estimated to be between $350 billion and $650 billion — while 30 million Venezuelans continue to starve.

Many Venezuelan journalists and activists know about the illicit money flows: how the Maduro regime effectively uses the opposition MUD to launder its money and work against more sanctions by participating in Potemkin village negotiations. They post about it on Twitter. 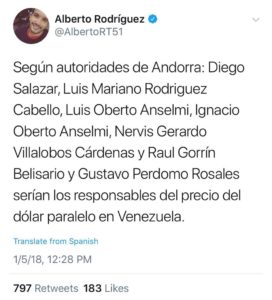 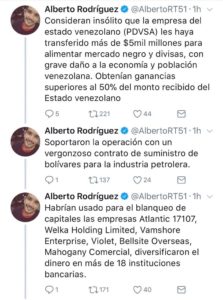 In that first list citing Andorran authorities is a major funder of the MUD opposition leaders: Raúl Gorrín Belisario, the owner of previously opposition-controlled broadcaster Globovisión. Gorrín is also widely rumored to be a legal proxy for Alejandro Andrade, Hugo Chávez’s former bodyguard (and later Treasurer of the Republic), cited in the book “Blood Profits: How American Consumers Unwittingly Fund Terrorists” as the holder of multi-billion dollar personal accounts in Switzerland.

The rumors are lent credence by this cosy photograph of Gorrín with Andrade’s son: 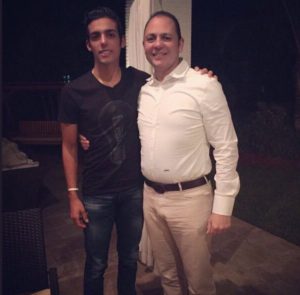 The Miami Herald reported on how Gorrín has met with US VP Mike Pence to try and broker a “negotiated exit” using access granted by Florida-based GOP lobbying firm, Ballard Partners, whose website reads:

Ballard Partners specializes in all aspects of governmental and public affairs, including legislative advocacy and administrative issues affecting agency decisions. Our philosophy is simple: We combine extensive government experience with unwavering advocacy to maximize clients’ results.

Ballard Partners brings a broad range of governmental and political expertise to meet the needs of its clients. Our lobbying success is grounded in our collective years of experience, a keen understanding of Florida politics, and effective representation in a myriad of policy areas, impacting a wide spectrum of state government.

But Gorrín and his cohorts are playing both sides of the fence.

It has long been known that the regime pays for travel and “associated expenses” of the leaders of the MUD opposition coalition to continue these false negotiations: evidence from booking databases routinely does the rounds of expat WhatsApp groups. 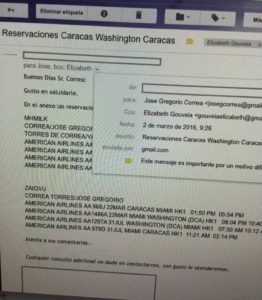 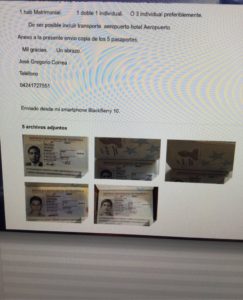 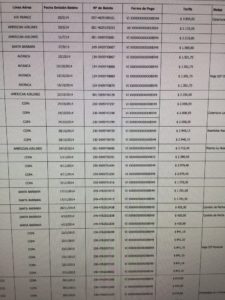 Venezuelans are dying, plunging into a famine, betrayed by their leaders on both sides.

A military intervention should not be needed, but unfortunately the regime has already acquiesced to a take over by narcos and terrorists, who are now indirectly controlling a false opposition held hostage in Venezuela. The sovereignty, safety and immediate needs of the Venezuelan people remain paramount.

If Venezuelans cannot save themselves, the international community must work with the ever-growing and increasingly politically active expat community to plan some sort of exfiltration strategy for the 30 million Venezuelans who refer to themselves as “kidnapped” by their government. Such is the responsibility to protect (R2P), so touted by the UN since the 1990s. Where is that doctrine now?