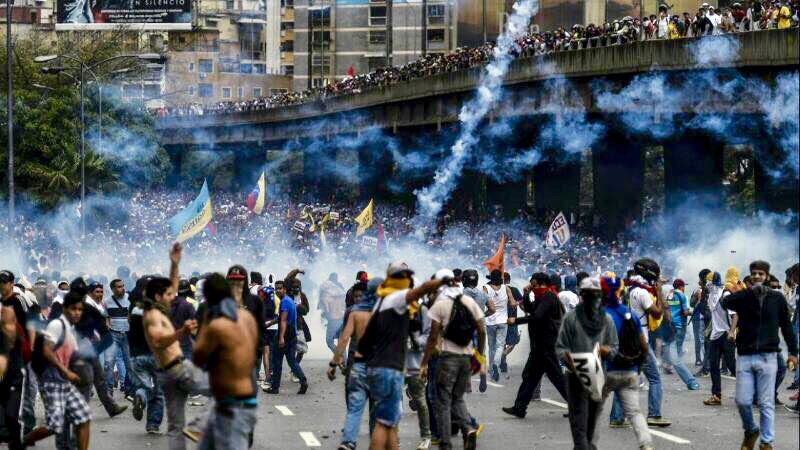 The opposition controls 2/3 of Venezuela’s National Assembly since December 2015. (The December 2016 local elections were cancelled and the presidential referendum denied.) Last week, on March 30th, the Venezuelan Supreme Court effectively staged a coup in favor of the regime (autogolpe, in Spanish) by stripping the National Assembly’s legislative power.

The outrage over the Supreme Court’s autogolpe was swift and unequivocal domestically, with international condemnation. Peru immediately pulled its ambassador indefinitely.

A day later, the Supreme Court (such as it is: there are rumors such decisions are written by one magistrate from within the presidential palace) reversed its decision, but kept powers that are alleged to have sparked the coup in the first place: to sign oil joint venture and financing agreements. That Venezuela is short on money is certainly no secret.

In response, President Nicolás Maduro made vague promises of elections in 2018. But at this point, that is well too far away for hungry Venezuelans.

Today, protesters took more direct action against the Supreme Court and firebombed it. 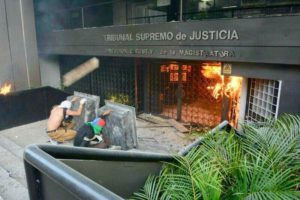 The political division and cycle of revenge continues to grow.

Since yesterday the Maduro regime used some arcane technicality to “disqualify” the opposition presidential candidate Henrique Capriles Radonski, today, the headquarters of his political party, Primero Justicia, was bombed. 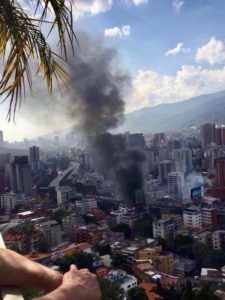 Sources in Caracas say it was by colectivos, gangs who were armed by the government to be their proxies and some DC analysts say have been trained by the Basij of Iran, with whom the Venezuelan regime has a very close relationship. The colectivos, however, are not always on the side of the government: they have assassinated some government apparatchiks in internecine skirmishes when their interests have diverged.

Sources say today’s attack on the opposition leader’s headquarters was likely a hand grenade. “It’s what they carry,” said a local.

Reuters’ reporting on yesterday’s disqualification of Capriles is very wrong on a key point: it says Capriles is was “the best hope” of the opposition. False.

For years, the rest of the opposition groups have thought Capriles is in the pocket of the regime: conceded his April 2013 electoral loss far too easily, when so many people considered it stolen; too eager to promote dialogue, when so many consider it a ploy for time for a regime that has no desire to grant any democracy. Capriles had to step up and support the protests of two days ago (April 6th), because everyone else did; he did not lead it.

In effect, Capriles has been dragged along by a radicalized opposition.

Two women are emerging: from the party Voluntad Popular, Lilian Tintori, whose imprisoned husband, Leopoldo López, really would win any election, and Maria Corina Machado, who leads Vente Venezuela. While Tintori has been coming and going from DC, meeting with the Trump administration and members of the US Congress, as well as the Pope and various Latin American heads of state, Machado has been barred from leaving Venezuela (even to visit her children) for years. While Tintori has built the international coalition of support, Machado (a distant cousin of mine by marriage) has coalesced the domestic forces for change.

When change finally does come to Venezuela, it will be a woman in charge.