It was a cataclysmic weekend in the KSA, as the Kingdom of Saudi Arabia is commonly known.

First, Lebanese Prime Minister Saad Hariri (a Sunni) fled to Riyadh and announced his resignation in a televised broadcast from there, citing “the long arms of Hezbollah.” He was afraid the Iranian proxy would kill him, the way they (allegedly) assassinated his father Rafic Hariri on Valentine’s Day 2005, with 2,200 pounds of TNT.

Then came the other attack: the anti-corruption sweep, arresting 11 princes and more than 30 businessmen. Amongst the arrested is Prince Alwaleed bin Talal, who controls Kingdom Holding, an investment firm with significant stakes in News Corp, Citigroup, Twitter, several hotel chains, and satellite television across the Arab world. In true KSA style, the Ritz-Carlton was evacuated to detain the arrested princes, the hotel’s main telephone switchboard disconnected, and the private airport was shut to stop those who might flee the jurisdiction on their jets.

There is no question that the sweep consolidated the power of 32-year-old Crown Prince Mohammed bin Salman, known as MBS. MBS is the one who personally ordered the sweep, just as soon as his father King Salman appointed him head of the Anti-Corruption Committee. MBS already controlled the economic, military and foreign policy branches of government. The purge has de facto given him control of the rest.

So we asked our network of experts: was it a coup or a true anti-corruption campaign?

The arrests were made hours after the king announced the launch of an anti-corruption committee with broad powers to investigate, arrest, ban travel and seize assets. KSA’s top religious authority welcomed the arrests, citing that fighting corruption is as important as fighting terrorism. (There is ample literature that rampant corruption fuels violent extremism, both in the Saray Chayes’ work and in the upcoming Blood Profits.)  Our SMEs who defended MBS’s actions as a legitimate integrity policy pointed to the fact that the drop in the price of oil has put the KSA in austerity mode, making corruption more salient and less tolerable.

Middle East and Africa expert Rudy Atallah has a positive view of the purge: “Foreign companies can now do business in the KSA without having to go through middlemen. These middle men have cost Saudi billions of dollars over the years… War forces leaders to change the way they do business.” Atallah considered the prominent businessmen arrested as: “Corruption and money laundering at its best. People to avoid at all cost.”

Several prominent military commanders and  others who were possible challengers to MBS’s power were also purged:

One of our trusted GCC experts told us that the Saudi Royal Court had seized an estimated $2 TRILLION in assets in the purge. That will certainly go some way in continuing the clientelist system on which Saudi stability relies.

Conclusion: It’s cause for concern

The drama continues. There were reports swirling on Sunday that there were more arrests and at least one of them resulted in a firefight with the prince’s guards. According to our expert: “It may not be true, but the fact that it’s out there is an issue.”

Then Twitter lit up with a reports that a Saudi-led coalition was closing all crossings into Yemen and there could be a military escalation. 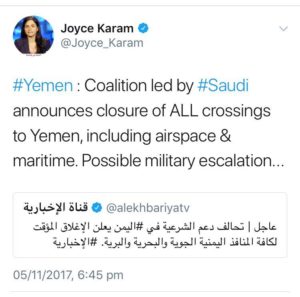 On Monday, the KSA oddly announced that Lebanon had declared war on it, under the influence of Iran. MBS has overtly escalated tensions with Iran, taking a hard line against it and its main proxy, Lebanese Hezbollah.

Meanwhile, back in Lebanon, life carried on quite normally without their resigned prime minister. A fractured or paralyzed government is nothing new to them.

Back in the US, Pres. Donald Trump sought to reassure the world that all was under control in Saudi Arabia. 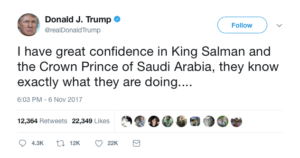 The ellipsis did not really mollify anxieties, unfortunately.

Our friends at the predictive analytics firm Predata saw the regional strife coming. In their October 29 Week Ahead report, they highlighted a rising signal for Saudi provocations in the Saudi-Iran rivalry. See the full text of the prediction below:

The simmering Iran – Saudi Arabia rivalry was one of the bigger gainers on the Scoreboard this week, as the two Gulf powers continue to squabble over issues ranging from Qatar’s diplomatic isolation to civil wars in Yemen and Syria. Predata anticipatory signals for the risk of further diplomatic escalation between Iran and Saudi Arabia suggest new developments may be imminent: the signal for the risk of an escalation from the Saudi side hit its highest level in three months this past week. The signal was last at this level in anticipation of this year’s Hajj and before the Kingdom severed diplomatic ties with Qatar, in part over the country’s warming relations with Iran.

A very high-ranking member of the US government under the Obama administration once expressed private bemusement that the world was not more concerned about instability in the KSA. His words are turning out to be prophetic. MBS’s strategy to bringing stability is to consolidate his power. We have no doubt it will work in the short-term; but as he amasses numerous well-connected enemies he is humiliating and sounds the drums of war with Iran, the question is: how long will this stability last?