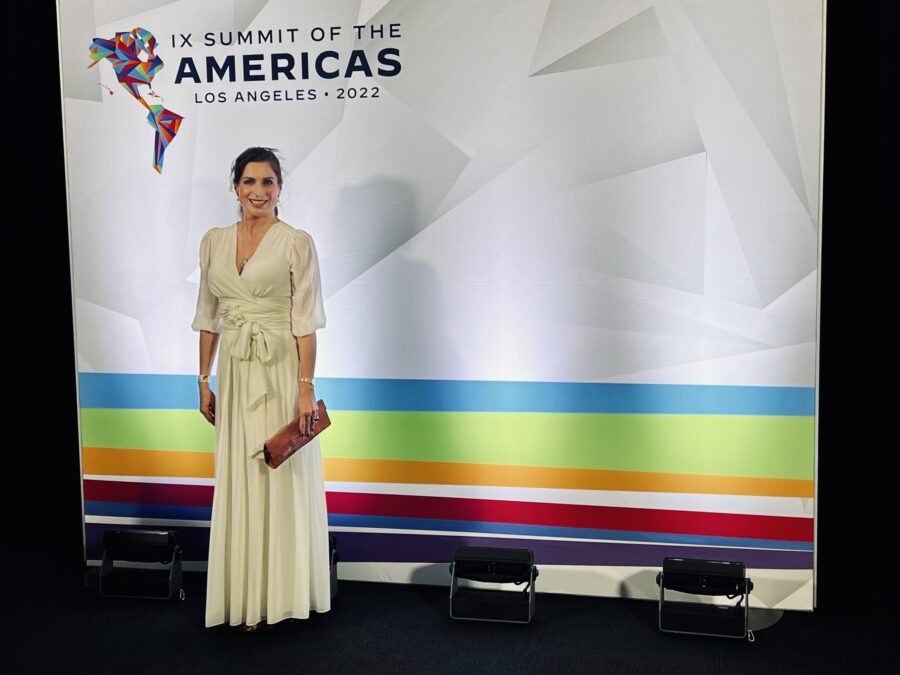 We are naturally delighted to be invited to participate in the follow-up and implementation phase of the IX Summit of the Americas (SOTA): our CEO Dr. Vanessa Neumann has been approved to continue in the process in her capacity as Spokesperson for Democratic Governance in South America. In that role, which she maintains until the next Summit of the Americas (which should be in about three years), she carries forth the concerns and priorities of nearly 400 NGOs and CSOs (civil society organizations), who will look over the shoulders of the 35 Member States to ensure they pass the right laws and support the strong institutions to meet their obligations signed in Los Angeles, California on June 9th, 2022.

Summary of the Obligations Signed

This IX SOTA’s theme was “Building a Sustainable, Resilient, and Equitable Future.” The signed agreement, for whose follow-up and implementation Dr. Neumann is responsible, is known as the Inter-American Action Plan on Democratic Governance. The key points of the agreement can be broadly summarized as follows:

Dr. Neumann’s duties will entail: coordinating with all the hundreds of NGOs and CSOs in Latin America, whom she has been elected to represent, and attending meetings with the Foreign Ministers of the 35 Member States of the Organization of American States (OAS) to enquire as to their implementation and hold them to account on their commitments, regarding Democratic Governance, which is the very heart of the OAS mission.

It is no secret that Dr. Neumann and OAS Secretary General Luís Almagro have long seen eye-to-eye on the issues afflicting the region. At the Homeland Security Enterprise Forum in 2021, Dr. Neumann and Sec. Almagro discussed how corruption and the attendant institutional breakdowns (resulting in a failure of services, security, and representation) are a major push factor in the migratory crisis gripping the region.

The Delta Between What Was Signed and What Was Sought

Arguably, however, the most memorable and controversial moment at the IX SOTA was Dr. Neumann’s reading of the official statement of all the hemispheric CSOs in her Democratic Governance group. The statement explicitly called for the regimes of Venezuela, Nicaragua, and Cuba to be declared dictatorships and for the OAS Member States call for Cuba and the Sāo Paulo Forum to stop interfering the national sovereignty of other countries. Although the Inter-American Plan on Democratic Governance that was signed on June 9th, 2022, by the attendees at SOTA eliminated those clauses, they were once again demanded by civil society at the OAS General Assembly meeting in Lima, Peru in October 2022.

You can watch Dr. Neumann’s reading of the hemispheric civil society demands on democratic governance at the IX SOTA on Dr. Neumann’s YouTube channel.